Roxy is a nice cozy apartment, most suitable for a couple. It has a beautiful view over the rooftops of Prague and the Prague Castle in the distance. It has a small kitchen, which includes everything you need (coffee maker, microwave oven, toaster, etc.) to prepare breakfast and simple meals. As all our other apartments, there is a high speed internet connection for those who wish to work or stay in touch with friends and the apartment is non-smoking. To get a better idea of this apartment, scroll down to view the floor plan. The apartment is located on the fifth floor and what it lacks in design it compensates with a great location in the very center of Prague 1.This apartment is especially convenient for visitors who love parties and nightlife, since Dlouha Street is famous for its bars and clubs, including the popular club Roxy. The building is also located only 4 minutes from the Old Town Square, in the heart of the historic center and is close enough for sightseeing by foot as well as visiting all of Prague’s interesting spots.

Historic records of the street, where our apartment is located date back to the early 14th century. This street originally connected the Old Town Square with Porící and was the longest street in Prague - hence the name “Dlouha”, “Long Street”. Even though it only measures less than 400 meters, its name has not been changed. Dlouha Street has a lot of preserved historical buildings such as the Golden tree house, which is located just across the street from our apartment. Another house number 5 has captures the attention of visitors because of its interesting and mysterious stories. This house might seem insignificant but it is known as the house “U Smrti”, “At Death”. As the story says, a young man returned to Prague after being kidnapped as a toddler by a pair of vagabonds many years before. Not knowing his origin, he unknowingly married his own mother and therefore was executed right in front of this building.

PLUSES AND MINUSES:
+ Roxy is located in the very center of Prague's Old Town, only 5 minutes of walk from the Old Town Square
+ Elevator in the building
+ The apartment has a fully equipped kitchen
+ High-speed wifi provided
+ Many nice cafés and restaurants in the neighbourhood
+ Secured parking within 5 minutes walk from the apartment (optional - not included in price)
- Since the apartment is situated in one of the most busy party streets of Prague, it can get noisy at night 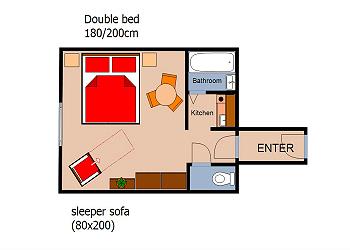