Synagoga is a bright, spacious and quiet apartment, superbly located in the heart of the old Jewish quarter. It is modern and nicely furnished for 5-7 people.


Synagoga has a well equipped kitchen that provides everything needed to prepare breakfast or other basic meals, practical especially if you want to save money. As every other apartment, there is a high speed internet connection for those who wish to work or stay in touch with friends. Synagoga is a non-smoking apartment. If you want a better idea of what it looks like, scroll down to view the floor plan.¨


Apartment Synagoga is located 30 meters from the famous Parizska Street, fashion and luxury brands lovers can enjoy most of the world's fashion shops (Luis Vuitton, Fendi, Prada, Hermès, Dior, Cartier ...). Please note that the apartment is located on the 4th floor without an elevator, which is compensated with a view of the Old Jewish Cemetery and the roof of the former ghetto. It is also an excellent starting point for exploring Prague. The apartment is literally a few steps away from Old Town Square and close to all the sights and cultural attractions. You can also enjoy spending an evening at one of the nearby restaurants or bars, which are all only a few minutes away.
Right from the apartment window, there is a beautiful view of one of the most important preserved Jewish cemeteries in the world.


Most Jewish cemeteries have been built outside of an inhabited area. Prague’s Old Jewish Cemetery is an exception, because it has become a part of the Jewish Quarter over the years. It is the youngest of three Prague Jewish cemeteries, but others do not exist anymore.
According to historical data, there are 12 levels of graves underground and there are approximately 12,000 dead resting in the cemetery. Unfortunately, the cemetery had to withdraw from expanding because of Prague’s traffic in the area now known as 17.Listopadu Street. The oldest tombstone dates back to the first half of the 15th century, but most attention is given to the grave of Rabbi Low, where visitors may lay little stones with their wishes. During the time of Rabbi Low a plague broke out in the Jewish ghetto, only small children died because of it. The legend says that every night little children danced in the cemetery, they could not find peace until a mother who had murdered her baby was punished. Today, the cemetery has no children dancing at night, so you can have a good night sleep.


Apartment use and noise: you commit to take care of the apartment and respect neighbours, particularly by respecting the interdiction of making noise between 22:00 (10 and 7 a.m. (which could result in 100 euros fine deducted from the damage deposit if neighbours complain about you and the police testify against you). Prague has many great places to party outside, and we wish you to enjoy it at best, the apartment is greatly located for that ;-)

PLUSES AND MINUSES:
+ Synagoga is located in the very center of Prague in the Old Jewish Quarter & 3 minutes walk from Old Town Square
+ Beautiful view of the Old Jewish cemetery from the window
+ Very quiet at night thanks to its situation on the 4th floor, windows overlooking a very small street and the Jewish Cemetery
+ There is a washing machine which can be really convenient for longer stays
+ The apartment has a fully equipped kitchen
+ High-speed wifi provided
+ Many nice cafés and restaurants in the neighbourhood
+ Secured parking within 5 minutes walk from the apartment.
- The apartment is situated on the 4th floor without an elevator
- Some renters smell an odor in the dining room. 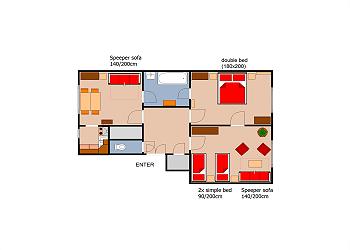